When I was 12 years old, my parents enrolled me in a summer school woodshop class. While most of the students built cutting boards and skim boards for their class project, I told our instructor I wanted to build a model sailboat. I wanted to build a boat named Kialoa.

My fondest memories of my father are the times we spent walking around different places on Oahu. One of our “hangouts” was the Ala Wai Yacht Harbor. On one of our tours, the fleet from the Transpacific Yacht Race was at anchor. Included in the fleet was race winner Kialoa II. In my 8-year-old mind, she seemed the most beautiful thing in the world.

I only saw Kialoa II once, but the impression of this sleek boat never left my thoughts. Kialoa II the sailboat morphed into Kialoa the dream. The dream a child has when looking to the future and thinking what can be. Somewhere along the line I told myself “if I ever have a business, I will name it KIALOA”.

In 1990, my wife Meg and I started an outrigger canoe paddle business on the backyard lanai of my parents’ home. We named the company KIALOA Paddles. In the years since, we have been asked many times if we named the company in reference to the Hawaiian definition for the word Kialoa – swift, fast canoe. The answer is always “no, we named the company after a sailboat owned by Jim Kilroy”.

I still have the model I built of Kialoa II, and while it is not an accurate replica of its namesake she does feature a cast lead keel so she could carry more sail. This model is the only toy I have kept from my childhood. But when I think about it, the model doesn’t matter. Kialoa is really about the time I spent with my father. A time, when he taught me how to dream. 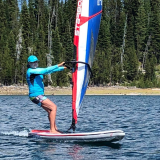 Dads are VERY cool. in 8th grade I wasn’t allowed in the woodworking class because I was a girl so my dad and I built a surfboard – and that lit the fire that still glows 56 years later https://elder-sup.com/2012/12/10/50-years-coolest-board-shaper/